Remaining Faithful: For Over 200 Years 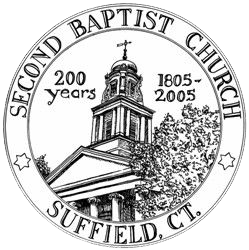 In New England, the Congregational Church had lost much of its hold on its members and on government by 1725. Eventually, some of its ministers decided a religious revival was needed. A fiery preacher by the name of Jonathan Edwards became a major stimulus for a religious revival in southern New England; his preaching attracted large numbers of people and his sermon "Sinners in the Hands of an Angry God," preached in Enfield, Connecticut, in 1740, became well known.

Interest in religion was revived, but, to the consternation of the Congregationalists, other religious groups such as Baptists and Methodists benefitted more in terms of numbers in the short and long run. Some Congregationalists in the Suffield church came to the belief that only those who had experienced a conversion (the "awakened") could be members and share communion. However, they were a minority and their belief was rejected. As a result, some left Suffield Congregational Church and, led by Joseph Hastings, formed their own church in 1747. They were known as "New Lights".

As years passed, the "NewLights" suffered internal dissension. Many returned to the Suffield Congregational Church and the others followed Joseph Hastings, who had been immersed in 1752 , in accepting Baptist principles. Hasting's congregation formally organized as a Baptist Church in 1769 and constructed a building on Zion's Hill(Hastings Hill). By 1790, the First Baptist Church of Suffield (and the first Baptist church in Hartford County) had become the seventh largest Baptist Church in Connecticut with 112 members and was an influential church.

A few years later, Deacon Ephraim Robbins and Baptists from two other churches received a response to a letter they sent to President Thomas Jefferson in which they expressed hope for support for the separation of church and state. In his letter to the committee of the Danbury Baptist Association dated Jan. 1, 1802, Jefferson stated that " Believing with you that religion is a matter which lies solely between man and his God, that he owes account to none other for his faith or his worship, that the legitimate powers of government reach actions only and not opinions, I contemplate with solemn reverence the act of the whole American people which declared that their legislature should make no law respecting the establishment of religion , or prohibiting the free exercise thereof; thus building a wall of separation between church and state." Jefferson also refers to " rights of conscience".

Thus, when some members of the First Baptist Church were granted permission to start a new church in 1805, they had encouragement and support from a strong mother church. The Second Baptist Church of Suffield obtained its first full time pastor in 1810, joined the Connecticut Baptist Convention in 1824 under Pastor Tubal Wakefield, and was recognized as a strong church. And the rest is history.

These early Baptists emphasized certain things: Soul Freedom; Priesthood of All Believers; Congregational Autonomy; Religious Liberty; Believer's Baptism (rejects infant baptism); The Bible. We American Baptists also emphasize the same things. Early Baptists had great obstacles to overcome and their sacrifices and faith have encouraged subsequent generations to stay the course. We at Second Baptist Church have faced serious challenges, physical and spiritual. Let us pray that sacrifice and faith will be part of our legacy for future generations.

"In the year of 1611, under the reign of James I, in the old town of Litchfield, England, Edward Wigthtman, a Baptist minister, who was accused by the dominant hierarchy of almost every heresy, and worst of all, the denial of the divine authority of infant baptism, was burned at the stake."

In 1805 Second Baptist Church in Suffield grew out of First Baptist on Hill Street. We still worship there five Sundays every summer beginning in August. While this new congregation endured persecution from townspeople who twice vandalized the construction site, they faithfully endured paying their tithe to the puritan church across the street while also supporing Second Baptist. The wooden beams from the original barn-like building survive today in our sanctuary superstructure.

The American Baptist Churches of Connecticut are proud to name their camp and conference center "Camp Wightman."